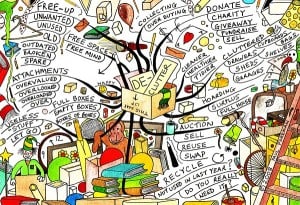 Starting this week, I began a huge organizational project for a dear friend of mine.  Suzy hired me on as her personal assistant, both domestically and professionally.  Suzy is a children’s entertainer and is also the director of a nonprofit organization called the Treasure Box Project, providing over 5,000 treasure boxes for underprivileged children in South Florida.  Needless to say she has very little time to upkeep her home and that’s where I come in. For the last several days, I have been cleaning, organizing, filling donation boxes, and pitching broken items.  In addition to the massive amounts of dust and cat hair entombing her tchotchkes there are just massive amounts of stuff.  As I sat in the center of hundreds of books, journals, and picture frames, I told Suzy about the 1,000 Items or Less movement that is gaining a unique following here in the U.S.

The movement calls for households to live with just 1,000 items or less.  Sometimes participants go so far as to count pens, utensils, and paper clips, but some are not as picky—reaching for the 1,000‘ish milestone.

With the economy in its shaky state, many families have chosen to down size (I myself just traded in my minivan for a compact, economical car, saving thousands on gas a year).  As people have had to make do with less or live in smaller quarters, there is a realization that material items not only drain finances but often bog us down.

There is a sort of euphoria that seems universal among these people that have chosen the 1,000 Item or Less lifestyle.  A woman in Portland, OR actually lives with just 100 items.  Suzy laughed at herself, “I have a thousand things just on my desk!” As Suzy and I clean out the clutter and create more space, the minimalist movement is on our minds pretty heavily.  1,000 items or less means more time for recreation, less environmental impact, more money in the bank, less to worry about.  It’s certainly not for everybody but something to chew on when you think you just need that figurine, another tee shirt, or serving platter. 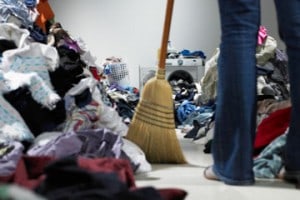 With the money and time you save with less, just imagine being able to do more! Let me know your thoughts on the 1,000 Items or Less movement—whether you would subscribe to it, would never consider it, or are now ruminating it.  Leave your comments at the blog, on Facebook or on Twitter @FitTrampoline.

Until next week, have fun cleaning out your clutter and donating it to charity or having a garage sale and making a few extra bucks for the holidays, college savings, or a massage!