Can you guess where I am? In this city, it’s literally all about the Dunkn' Donuts. Forget Starbucks (my favorite chai tea latte—especially in this cold weather)—if you don’t get excited by having a pink and orange-labeled cup in your hand, you must not be from around here!

This city was built on a landfill. Does that give you any better of an idea where I am? Today I ate at a place called b.good—one of the local “organic” burger joints in town. Of course, being based out of California, “organic” is nothing new to me.  But what was I supposed to think when I went to this restaurant and they told me everything was organic? I mean, I was eating the food that was grown from the dirt below me, which was placed on top of the trash and a septic-nastiness-landfill underneath me. This was considered “organic?” Overall, I know that is not completely how the science of it works, but the whole image wasn’t the most appetizing. It suffices to say, the burger was still delicious! 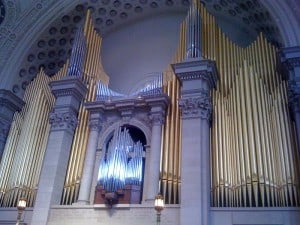 This city is home of a church that was founded by a woman who, a little over a decade ago, was named “one of the 25 most significant religious figures for Americans in the 20th Century” by the PBS program Religion & Ethiscs Newsweekly. That may be a hard clue for some, unless you have a religious educational background—so I’ll move to the final 2 clues. If you can’t guess it after these, then there is nothing I can do for you!!

This city has the most colleges and universities per capita in the nation!

And finally, this city is home of a cable built bridge named one of the top 10 bridges in the world by the Travel channel, and has also been featured in movies like The Departed and War of the Worlds. 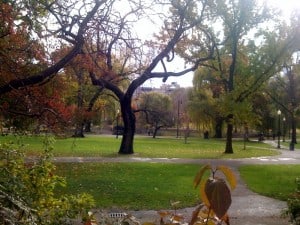 That’s right! I’m in Boston! (Hopefully you had it figured out by now.) I’m here for a JumpSport Fitness Trampoline Trade show. I came a few days early to explore the city and learn a little bit about the place as I’ll be cooped up for the entire weekend in a hotel working away with the other Fitness Carnies! That’s what one of my co-workers called me today and I thought it was hilarious because it is so true! If you’ve been to these trade shows as a vendor or an attendee, you know it’s work, work, work—like an experience at a carnival! But the fun thing is that by attending so many trade shows, you develop a familiarity with the other carnies and become as a family moving from city to city.

Right now I’m on the way to the show and I a sitting in a taxi driver’s car who thinks she is a witch. That is right. On my way to the show I had to take the T and then a trolley to Salem. Salem is where all of the witch trials were that I learned about in middle school! My driver told me that, “they say if you are born in Salem you are a witch.” Of course I had to ask her where she was from and she conceded without hesitation, “Salem.” 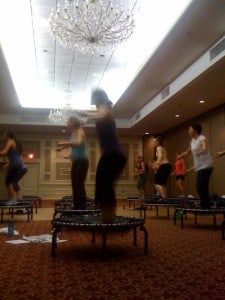 Interesting… Just don’t cast a spell on me or my trampolines and everything will be fine!

Here’s the brief conversation that proceeded:

Me: “Have you ever had your palms read before or Tarot cards read?” (I thought it would be kind of fun to do, but don’t really believe in it and in any case, would never want to hear a creepy fortune about my future).

Driver: “Yea, I did when I was younger. The woman read my hands and told me my future didn’t look good. She said I would be single for a very long time. Well, that was over 10 years ago and I haven’t dated since. She jinxed me.”

Me: “Are you serious? You’ve been single ever since? Do you think you just jinxed yourself?”

Driver: “Yea, probably. But I like it better that way. I don’t have to deal with people. I can just take care of myself, and live my own life with my son.”

And that was basically it. She liked working as a taxi driver because if somebody were rude to her, she would never have to drive them again. (Can you imagine a society or nation where nobody confronted the other? It seems unpleasant.) And if her manager was rude and yelled at her through the intercom in her car—she could just yell back without pressing the feed button for him to hear.

Now we are about to pull up to the hotel and I will genuinely wish this woman the best.  I hope she is happy, and I am happy to have learned a little bit about her and the culture in the area. Now it is time to be surrounded by my trampolines and carnie-family once more! This should be an exciting weekend!