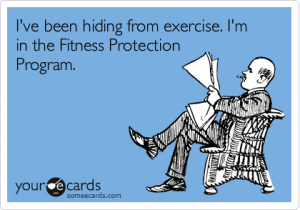 Most of the blogs I write for JumpSport are about exercise or trying to stay healthy while balancing work and motherhood, etc. Being a new parent and only having one child, I try to steer clear of discussing parenting or making grand parental statements. Today, I had a “I am a good mom” moment though and wanted to share it with someone. So, I thought, why not share it with everyone?

In June, on a random Sunday afternoon, on a whim, I adopted a 2 ½ month old Weinheimer-Shar-Pei-mixed-with-God-know-what-else puppy. He was only 20 lb, predicted to be about 50 lb . I figured I was getting a best friend for my son, a walking partner for me, a companion for Howie (my older Chihuahua) and a dog that could play fetch, go to the park etc with Milt. We named him Montana.

A “whim” is not exactly accurate.  We had been looking for a puppy for MacLaren.  Milt and I had also decided we were going to wait.  But when I saw Montana and how much my son loved him and realized he would be free because it was a Maddie’s Weekend (if you are not familiar with that event check it out) ….. I could not resist. 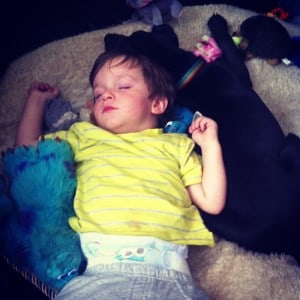 Quickly I realized things were not going to be as easy I thought.  I had never adopted a puppy before.  I got Howie when he was two-ish (never really sure when you adopt an older dog how old they are) and all other dogs that had come into my life I met when they were for all intents and purposes also adults.  Montana had never had a collar on, didn’t understand what a leash was, was not potty trained, didn’t know how to fetch, made Howie incredibly annoyed by simply breathing too close to Howie’s bed, and sadly no one else seemed to think it was a good idea.  I was constantly being asked how in the world I could adopt a puppy when I had a baby and an older dog and we lived in an apartment. The only person who never wavered in their adoration of Montana was Mac.  From day one, Montana was Mac’s dog and Mac was Montana’s person.

I stopped trying to walk Montana as it was virtually impossible to get in any type of workout. I knew I had to be a good dog mom though so we transitioned to going to the dog park 4-5 times a week.  But, the thing was I stopped working out period.  It felt selfish to go on a walk without the dogs and walking is pretty much the only thing I can do with Mac.  I even stopped my trampoline workouts.  I think I was just a bit depressed over the whole thing.  Mac was still thrilled though and that ultimately was what was important---not the fact Montana gained 10 lb in one month so he is already 45 lb and going to be a lot bigger than expected.  Maybe everyone (especially my mom) was right and I shouldn’t have gotten Montana.

On Friday, I did something I had not done in sometime.  I walked Mac to daycare with my friend and her son.  Milt was home so he took Montana to the dog park .... so no guilt for Mommy.  And you know what?  I remembered something!  I LIKE working out.  I like walking and sweating and the feeling of accomplishment I get afterwards. 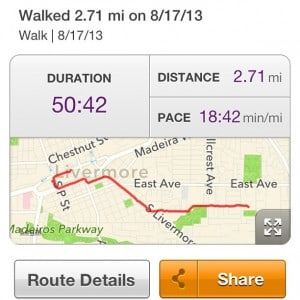 On Saturday, we did the dog park in the morning and then I had Milt drop Mac and I off at Mac’s morning play day so I had to walk back---2.5 miles.  It felt great.  I decided then and there, I was not going to feel guilty for needing to walk.  Since Montana couldn’t seem to get it together, I was simply going to do with without him …. or so I thought.  Sunday, we took Montana and played fetch at the dog park with friends and I did a quick rebounder workout.

Even though my girlfriend is not available on Mondays to walk, I was bound and determined to walk Mac to daycare this morning.  I needed that 3.25 miles under my belt this morning.

I was getting Mac all ready, including his fruit, juice and Cheerio stroller tray together when Howie jumped into the bottom of the stroller … where he normally rides.  Just when I started to take him out of there, I noticed Montana was at the door sitting, tail wagging, looking at the door handle.  I thought to myself “what is the worst that can happen?  I get stranded and have to call one of my girlfriends to come get me.  They will understand.”  (Somehow the women I have become friends with in Livermore all love their animals as much as I love mine, it is a real blessing). 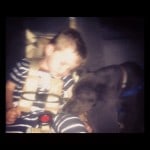 So, I hitched up the toddler, the chi and the puppy and you know what I did?  I walked 3.25 miles.  Was it the most perfect walk in the world?  Nope.  Montana doesn’t like walking over metal grates.  Can’t really blame him for that, they make a lot of noise.  It took about 15 minutes more than usual.  Want to know why?  For about half a mile on the return trip, Montana kept trying to go back.  I couldn’t figure out why initially until I realized he wanted Mac.  Montana and Mac are best friends 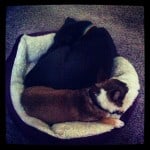 With sweat pouring down (literally pouring after not walking for a few months I am in a bad way here) half way home, I looked down at my son's best friend and realized Montana was WALKING!  And I thought about the last few days.  About Montana playing fetch at the park with Milt while he held Mac.  All three of them laughing.  I thought about Howie and Montana literally cuddling on Saturday night on my bed while we had a movie night.  I thought about the fact that Montana--- now 50 lb & still growing—crawls into my lap once a day for kisses and that the first sentence Mac ever said was “where he go?” when he was looking for Montana one morning.

Since we got him as a puppy, I do know when Montana was born.  Today is his 5 month birthday and he gave me the best present in the world, because today I realized I did a great thing for my family.  My son has a best friend, I have a walking partner, Howie has a companion (who still drives him a bit batty but who he loves) and Milt got the dog he has been missing from his life for some time now.

Happy birthday Montana….. now if you would learn how to jump on the trampoline rather than sleep on it that would be great!  :) 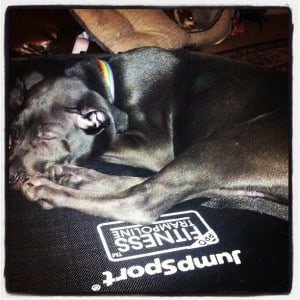 Thanks for indulging my “mommy” blog.  Promise it will be all about exercise next time!