Why not is t 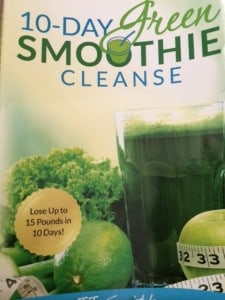 he better question apparently. A month or so ago, my friend told me she was going to do the 10 Day Green Smoothie Cleanse by JJ Smith. I thought it was silly honestly. A “fast” was nothing I wanted a part of and thought of them as fad diets.

I saw my friend a few days after she finished her 10 day green smoothie cleanse. Her skin looked clearer, her face thinner and she over all seemed to be in better spirits. When I asked her about the cleanse, she said not only had she liked it, but she was still having a green smoothie every morning rather than a traditional breakfast. In addition, she no longer craved sweets, carbs or even caffeine. Her transformation was so complete, it made me curious and every persuaded my partner to give it a try with me.

The basics of the 10 Day Green Smoothie Cleanse

Milt and I both read the book 10 Day Smoothie Cleanse Book (well, I read it, Milt skimmed it). There are a few important notes about this cleanse: 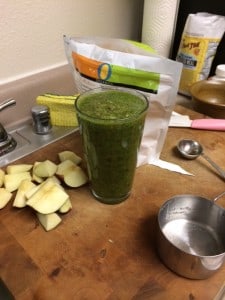 Can we really make it 10 days? 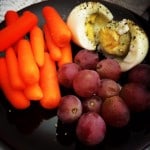 So here we are on morning two of our green smoothie cleanse. Although I am doing the 3 meal replacement cleanse, Milt has chosen to do the 2 meal replacement plus dinner cleanse. Being 6’7” and an ex-football player, the idea of no meat for 10 days was simply too much for him—so he is having a salad with a protein every night as well as adding the protein powder to his smoothies (something I am not doing). I am feeling pretty good for day 2, when I presumed I would be in a foul mood due to lack of coffee.

We will check in again on Day 5 to see where we are at….for now check @fittrampoline on Instagram and Twitter for updates!

If you have a cleanse story…doesn’t have to be the 10 day smoothie cleanse…tell us about it!