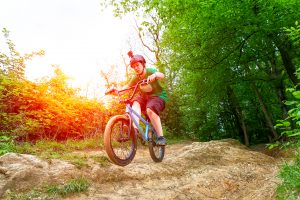 In the early 80’s… I was obsessed with BMX. I had all the magazines, watched racing at the local track when I could, had just the right race bike picked out, and suddenly, without warning, I had ended up with a very heavy ‘no-name’ bike, not for racing, from the local toy store and no parental permission to race. Yikes! Needless to say, it wasn’t what I had in mind.

Over the years, BMX racing remained a hope and a dream in the back of my mind.  I thought about what charging out the starting gate on my bike or crossing the finish line would be like but dismissed it as a missed opportunity.

Fast forward about 25 years… In November 2008, I was on the brink of turning 40. I had a sudden flash of my unrealized dream. I was talking to a friend when they mentioned taking up playing in a band like they used to when they were younger. I had a bit of an epiphany that BMX racing did not have to be something I missed out on. I could do it now!

So, I finally bought that ‘83 Mongoose, just like the one I pinned for in my past. I went to the local track, checked it out, asked some questions, ran some laps, and got hooked.  I moved up to cruiser class, a bike with 24” wheels, and began to race about 3 times a week at the local track. It was a dream that had finally been realized.

Along with on-the-bike practice, I started a training program that included eating right, weight training, and rebounding. I try to spend at least 20-30 minutes a day working towards my fitness goals. I work for JumpSport, so their Fitness Trampoline was a natural choice for rebounding. I have the 300 series. It is easy on the knees, and a fun indoor workout. I built muscle and lost about 30 pounds in my first 6 months of racing. My training has really paid off. I won the local district championship last year, in my first year of racing. This year I placed 3rd in the State Championships in the 41-45 Girl’s Cruiser age class.

I just turned 42 a few weeks ago, and I have never felt better!

My Favorite Quote: "Keep true to the dreams of thy youth." - Friedrich von Schiller