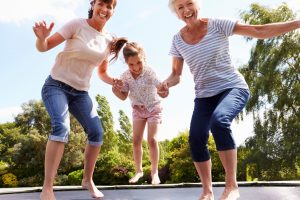 Springtime is almost upon us! And that means that there has never been a better time to play with our kids outside. Whether you’re just playing with one child, or you’re supervising a large group of children, these traditional outdoor games are sure to delight!

This classic game of pool tag mandates that “It” closes his or her eyes and attempts to find and tag the other players by sound. When he or she says “Marco,” the other players have to say “Polo,” thus revealing their general location and making them easier to tag.

Just like in regular tag, when “It” tags another player, he or she becomes the new “It” and the game starts all over again. As well as being able to teach kids a little bit of history, Marco Polo is one of the best group games for kids.

This fun trampoline game gets 2-5 players jumping on a trampoline while trying to avoid 1-5 balls or other small objects from touching them as they bounce up and down. The player who lasts the longest without allowing themselves to get touched by a ball wins. This game is great for smaller groups and can be fun way for both kids and adults to get their bounce on!

Requirements: Trampoline, balls or other small objects, 2 player minimum (someone to throw, someone to dodge).

Unless you have a pre-made Hopscotch court, this game usually starts with a series of rectangular numbered boxes being drawn onto the pavement with chalk. After the boxes are drawn, players throw an object into the boxes and jump through them to retrieve it. This game is best for smaller groups and teaches agility and forward thinking—as well as being pretty fun for parents and kids alike.

Monkey in the Middle

Monkey in the middle teaches ball skills to potential young athletes, as well as teamwork, coordination, agility, and more. But be warned, taller athletes will have a significant advantage in preventing a ball from being caught—so they’re often better placed in the middle.

Best for large groups, Capture the Flag has two teams, each responsible for protecting their team’s flag, while at the same time, working together to capture the other team’s. Players can tag enemies that enter their territory and put them in “jail.” Their teammates can rescue them by running into enemy territory and tagging them without getting caught themselves. Capture the Flag is great exercise for kids—and it’s a much better team builder than simple tag.

No matter what games you play, make sure to get your kids outside this season

Whether they’re playing soccer, dodge ball, hopscotch, or simply taking a brisk walk in the park—every minute your kids spend moving outside will help them grow into fitter, stronger, and healthier adults.

Want to play Crossfire or Poison Ball but don’t have a trampoline? Get one today!