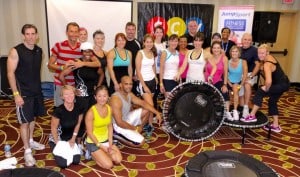 Ok, let’s talk about JumpSport's sizzlin' hot trampoline.  It’s always heartening to be associated with a winning team.  Sure, on the sidelines, you may be the diehard fan that cheers for the underdog and rallies the troops for the team that mirrors the “Bad News Bears,” but when it’s your turn to be on a team, it’s with a sigh of relief that you’re on the roster with motivated, optimistic, can-do people as opposed to slackers who play because of food and beverage specials offered to local teams by nearby pubs and restaurants.

On that note, JumpSport Fitness Trampoline™ has amassed a wave of popularity, press and warm reception from the fitness world, the media, and everyday exercisers.  JFT became a media darling at the FitBloggin’ 2011 Conference in May where over one-hundred fitness bloggers converged and many had an opportunity to “test drive” the JFT.  The bloggers reported to their fan base how much fun the JFT is and what a great work out trampoline-training provides.  The electricity for this hot fitness trampoline sparked.

By July, instructors of JumpSport Fitness Trampoline™ were receiving calls from the media asking for interviews. JFT Master Instructor Michelle Mascari-Hanlon was interviewed by the South Florida Sun-Sentinel.  One of the Mascari-Hanlon’s students was quoted in the article as saying, "It's like being a kid again, but you don't have to share and wait your turn”.  Another instructor, Lisa Canora Gagliardi, manager of “The Gym” in Armonk, New York, was interviewed by the The Journal News.  Additionally, while you are waiting to check out in the grocery line, check out the latest issue of Prevention magazine (September, 2011).  Prevention magazine used the JFT in order to test out sports bras (GENIUS) and on July 29th began a sweepstakes for three lucky readers to win their very own JumpSport Fitness Trampoline™! Prevention magazine is the largest healthy lifestyle brand in the world, this is Team JFT.

And the coup de grace: last week JFT instructor Stacy Rosen of Michael’s Body Scenes in Boca Raton, FL who teaches JFT under the class name “New Tramp in Town” was interviewed for Primer Impacto, a news show on the Latin media giant, Univision.  Univision is a global television network with enormous viewership around the world.  JumpSport Fitness Trampoline™ is going international! To watch Ms. Rosen’s interview, tune in this Thursday, August 4th at 5:00, EST.

In addition, JFT has been doing a bang up job at the trade shows. The Mania Show in Atlanta was a huge hit thanks to our killer instructors and support staff.  Just check out the JFT Facebook page for user comments and attendee feedback (http://www.facebook.com/FitnessTrampoline?ref=ts).  This week our team is headed to Washington, DC for the 20th Annual DCAC International Fitness Education Conference & Trade Show.

So as you bounce, do your bench dips, Pilates, circuit train or mogul side-to-side on your JFT, know that you are indeed on the cutting edge of the fitness world and that you are part of something both novel and innovative.  With that said, please share your stories and your photos with us on the blog or at Twitter: @FitTrampoline.  Be a part of this wave, this new generation.  Your creativity inspires us! Share the sizzle about this hot trampoline....