Since school started, my house has become the neighborhood hang out. It’s not because we have great snacks or cool video games, no, it’s because we have two trampolines in the backyard that the kids find so irresistible. 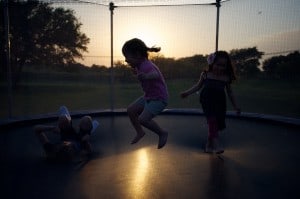 Despite the south Florida heat, a gaggle of children ages 3-15 skate, bike, walk, or scooter over to our house only to proceed with jumping for hours on end with the occasional “head dip” into the pool to cool down.  It was during one of these trampoline soirees that one of our favorite teens asked me about trampoline competition at the Olympics.  As a blogger for JumpSport, I had to know the answer, right? Nope. I thanked him for his inquiry (and subsequent topic for the week) and told him that I would get back with him after some research.

The trampoline was first introduced in the 1930’s.  George Nissen observed trapeze artists using a net to perform theatrical bouncing numbers between swings and became infatuated.  He developed the first prototype and named the product “trampolin,” the Spanish word for diving board.  To market and sell his trampolin, Nissen showcased it both as a performance and as a product that could be purchased by the consumer.  The popularity of the trampoline spread so quickly, so far that it not only became included throughout physical education classes in the U.S. but also integrated into Naval training programs. 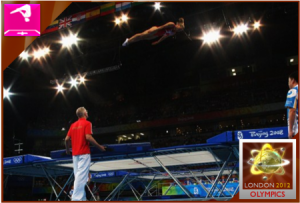 The athletic skill required to trampoline was soon mined and gained international acclaim. Europe embraced the sport with gusto and in recent decades, Japan and China have also cultivated star athletes to compete.

Trampolining has been an Olympic sport since 2000. According to the Federation Internationale de Gymnastique, a routine consists of ten contacts with the bed, or mat, of the trampoline combining varying twists, rotations and shapes. In all positions the feet and legs should be kept together and the feet and toes pointed. The positions of the routine include the straight position, the pike position, and the tuck position. Timing is key as it denotes the accuracy and skill of the trampolinist. The competitor both starts and ends with feet on the bed and must remain completely still.

There are varying trampoline competitions including synchronized trampoline, double mini-trampoline, and tumbling. In synchronized trampoline, two athletes perform a routine simultaneously. The double mini- trampoline is a trampoline that is smaller than a regular one and is sloped. Tumbling combines the acrobatics of floor gymnastics with trampoline jumping. Canada’s Rosannagh MacLennan brought home the gold medal at this year’s Olympics and Dong Dong from the People’s Republic of China achieved a gold medal in the men’s trampoline competition. The skill required to jump over 25 feet into the air and perform aerial feats is amazing.  You can see many of the performances on YouTube. Watch the Gluckstein Brothers from New Jersey on the Today Show for a quick introduction to the sport, the athletes, and a look at synchronized trampolining.

I hope when you are doing your stationary jogging, criss crosses, jumping jacks, or Plyo jumps on your JumpSport Fitness Trampoline™, you think of yourself not just as an exerciser but as prestigious athlete conditioning for elite competition.  Perhaps this will give you that extra gusto to go the extra mile, and attain that critical burn we call accomplishment. Bring home the gold! 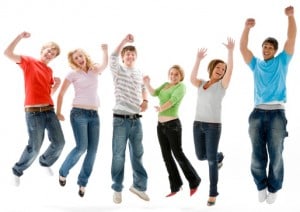 Until next week, I wish you all happy and healthy jumping!